Feralisation, the process of a wild population arising from a domestic species, is a rare example and an ideal model of very rapid natural selection. Is the domestication process reversed, causing feral animals to become more like their wild progenitors, or is evolution accelerated in a new direction? We are addressing this question in Australian feral mammals using genomic, morphometric and ecological techniques. Understanding how natural selection in a very short time undoes 5,000 to 20,000 years of selection during domestication will yield profound insights into natural evolutionary processes.

We have started applying next-generation sequencing to feral cat population and landscape genetics, with a former postdoc, Dr Jamie Gorrell, now at Vancouver Island University. Early analyses have found feral populations at different locations in New South Wales to have unpredictable genetic composition, raising the possibility that Australia’s feral cats are a mosaic of old, stable populations and recent migration from local domestic or stray cats.

Morphometrics and evolution of feral pigs

Dr Gabriele Sansalone (UNE Postdoctoral Fellow) is leading a collaborative project with Professors John Gibson and Steve Wroe. He is an expert on morphometric analysis, and will apply these skills to the evolution of Australia’s feral pig population. Skull morphology has a close evolutionary relationship with ecological feeding niche, and differs between feral and commercial pigs. With this project we aim to not only identify the likely source population/s of modern-day feral populations and variation consistent with local adaptation, but also to uncover the modularity and ontogenetic pathways of evolutionary changes in pig skulls. 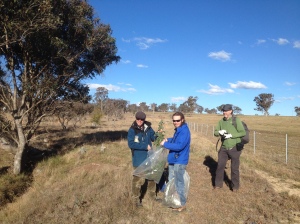